Are you wondering who/what Burberry McGarrett is? Need a refresher? Click here.

The Second Time They Didn’t

As Max fussed over the autopsy report of Five-0’s latest John Doe victim, he considered the possibilities. The victim had obviously had extensive surgical work — but unlike the typical victim of murder in a high-end Waikiki neighborhood, this surgery was all internal — not cosmetic. Finding the surgical markers he was looking for, he tutted to himself, casting a sidelong glance at his upright piano. His fingers twitched and he wished he could play for a few minutes. He’d have to make a call — to the mainland — and he mistrusted phones (and the mainland). But the research had to be done. Commander McGarrett and Detective Williams would be striding through the door in an hour looking for an update and Max knew he could not disappoint. However, he did have alternatives to using the phone he so disliked.

He gently pulled his laptop from its case and connected the office WiFi. Clicking on Skype, he began to enter the number of his contact on the East Coast. Little did he know that his call would not make it to the intended target, instead, a sophisticated hack of the Medical Examiner’s server re-directed his message to a hotel room on the other side of Oahu…

…On the other side of Oahu… Burberry McGarrett cleared his throat as his computer chirped and alerted him to the incoming Skype chat. Adjusting his stolen lab coat, he fussed with the clip of his forged ID badge and slipped a simple wedding ring on his finger. The monitor was facing the interior wall of the hotel room which Burberry hoped was bland enough to pass for an office.

Quickly moving to stand in front of the computer, he undid the top two buttons of his pale blue dress shirt and ran his fingers through his hair, mussing it slightly on the top. Accepting the chat request, he smiled openly into the screen. 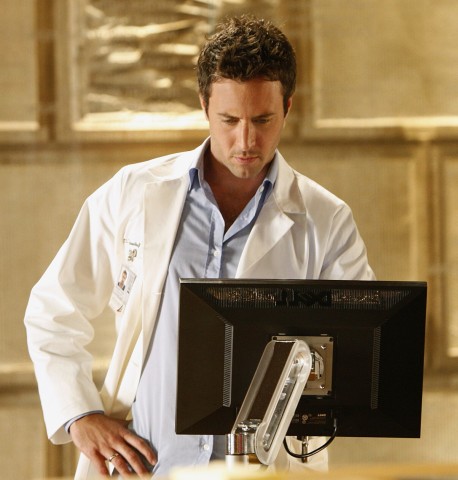 “Doctor Bergman! Nice to meet you. Thanks for agreeing to the Skype request.”

“My… pleasure, Doctor Yablonski,” Max nodded in agreement. “I find Windows Live Chat to be highly overrated and…”

As the conversation continued, Max flipped through the file on his contact, Andrew Yablonski. The top page contained a photocopy of a Three Rivers Medical Center security badge which displayed the friendly the face of the man he now conversed with via the internet. Doctor Yablonski provided some pertinent details on the transplanted heart of the murdered man, and in return, Max expounded on the Five-0s current theory of where the victim may have been hiding nearly 10 million dollars worth of rare jewels.

Burberry grinned, hardly able to keep himself in character. He’d have his hands on those gems in no time thanks to this valuable intel. “We don’t see a lot of missing jewelry in my line of work,” he shrugged. “It’s so fascinating though, Doctor Bergman. Thank you.” The chat concluded and the Skype window closed with an electronic pop.

Max filled out the paperwork on the murder victim’s identity as provided by Doctor Yablonski. Commander McGarrett appreciated it when Max filled out the medical examination forms neatly and completely. Detective Williams appreciated it when Commander McGarrett read him the highlights, so he didn’t have to interpret them himself. Max knew his contribution to the Five-0 Team was an important one.

Across the island, Burberry loaded his Walther PPQ, chambering a round noisily. He’d get to the cache of jewels before the Five-0s and make a clean getaway. Grinning widely, he thought “Some days, I love my job.”

Feedback is appreciated — thank you.