The Flame of the Candle (B.C.)

“I wonder if I’ve been changed in the night. Let me think. Was I the same when I got up this morning? I almost think I can remember feeling a little different. But if I’m not the same, the next question is ‘Who in the world am I?’ Ah, that’s the great puzzle!”
― Lewis Carroll, Alice’s Adventures in Wonderland 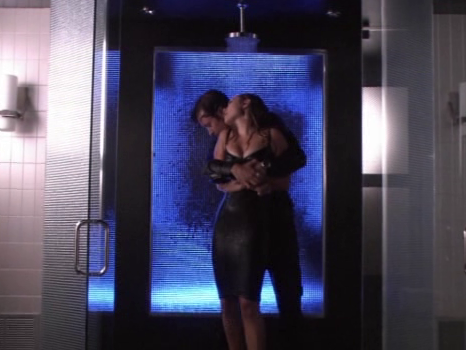 So the audience isn’t kept waiting: Mick & Beth in the shower.
Because dessert gets served first here at the Junk Drawer.

Now on to our regularly scheduled vaguely worded recap!

While Beth is on assignment covering a fashion shoot, a young model named Renee falls ill and suddenly dies – just as Josef goes to Mick for help in tracking down Lola, an ancient vampire who has made off with a bit of Josef’s money. Mick quickly learns that Lola has recently purchased a large warehouse and is using it to store a metric ton of silver, a poison to vampires. He resolves to examine the matter closely.

Beth braces herself for microchipping.

“Alice had got so much into the way of expecting nothing but out-of-the-way things to happen, that it seemed quite dull and stupid for life to go on in the common way.”
― Lewis Carroll, Alice’s Adventures in Wonderland

Meanwhile, investigating Renee’s death, Beth attempts to gain entrance into the VIP room of a new dance club. When she is unsuccessful, she visits the morgue, where she learns the girl overdosed on pure silver. She meets Mick and discloses what she has learned about the silver, which interests him. With Mick’s help, Beth is able to access the VIP room of the club where she observes the patrons taking a drug called “Black Crystal.” Mick joins her, but not before she has attracted the unwanted attention of Lola. Before the investigation can proceed however, the police, led by Josh, raid the club – and they all go their separate ways.

“If you drink much from a bottle marked ‘poison’ it is certain to disagree with you sooner or later.”
― Lewis Carroll, Alice’s Adventures in Wonderland

Beth returns home with a vial of the Black Crystal drug hidden away in her purse. Home alone, she tries the drug. The effects are immediate and intense.

Mick lets Black Crystal Beth in to his apartment.

“She tried to fancy what the flame of a candle is like after the candle is blown out, for she could not remember ever having seen such a thing.”
― Lewis Carroll, Alice’s Adventures in Wonderland

The next day, Beth learns from Josh that the police will raid the warehouse where Lola runs her drug operation. Beth tips Mick off, and after taking Lola head on, he burns the warehouse to the ground to prevent information about vampires from becoming public.

Afterwards, Mick and Josef commiserate over the loss of Lola, while Beth attempts to go back to life as usual with Josh.

“I can’t go back to yesterday because I was a different person then. ”
― Lewis Carroll, Alice’s Adventures in Wonderland 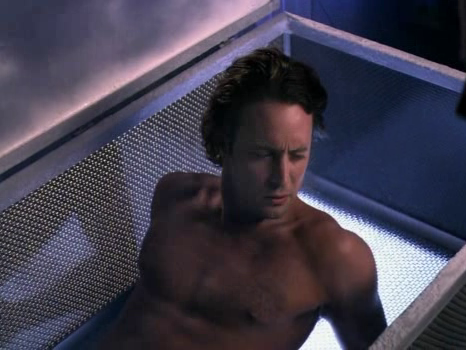 Why hello these things!
Grandpa Mick is cranky in the mornings.

A) Can you imagine sleeping naked in a freezer?

B) Dancing on the cheekbones… No. Just No. Sorry, but Holly’s not my type…. I have no particular admiration or envy of her cheekbones.

C) Mick’s great lines in this ep: Digitial photography what a boon for the tribe, eh? / Perpetual Coolness Is The Vampire’s Curse / Oh there’s space! There’s space. 😆 Plus some others I’ll mention below, plus probably some more that I won’t. This ep was a great one for Mick.

D) Building a Pirate Army! Back in the day you could do that kind of thing! 17th Century Lola was a hoot.

E) Alex’s face through this whole episode is working overtime, it’s really incredible. Mick is pretty giddy that Josef is in such a tight spot over a woman. Then he’s all concerned about Lola killing vamps. Then disgusted by the vamp killed by silver. Then Beth’s got him all twisted in knots. And on and on and on. It’s the emotional gamut that is just… pretty impressive. Hence my inability to exercise moderation in my screencapping of this episode.

F) I need this microchip inserted in my hand / Well of course you do! But then Mick has this big honkin needle (yeah yeah yeah) and she doesn’t even feel it! Also, the kiss? An accident. Oh! Good to know!

That kiss was tooooooootally a mistake, yeah right you betcha.

G) I did not understand Lola’s motivation — to make money getting humans high? I mean… with a silver-based drug in their systems, it’s not like the vamps could feed on the high humans, right? So what’s the point? and if she can just …wheedle a million dollars out of Josef once every few years, what’s the point of such an elaborate business venture?

H) However Mick has totally seen Beth naked now, so Lola who’s plans are what now, no one cares, hmm?

I) Beth & Josh’s apologies to each other — what really great scene. To me, that was believable & sincere and showed what good hearts these two had, and you could see how the two of them really “worked” together.

J) So Lola had to hire human scientists to work with her silver-based drug. Mick didn’t seem too fussed about outing his vamp-ness to them which got me thinking about being a female vamp — and having male freshies (if one were so inclined, NOH8) — instead of female ones? Would have loved to have seen some of that.

K) Lola you Velveeta Queen. (that is all)

L) Love, love, love Mick refilling & leaving the drink for Josef once he’s done with it.

“How puzzling all these changes are! I’m never sure what I’m going to be, from one minute to another.”
― Lewis Carroll, Alice’s Adventures in Wonderland

Mick ensures Beth has recovered ~ OTP: Mick & Red Meat ~ Beth has a date with some facial scrub in her near future

`But then,’ thought Alice, `shall I never get any older than I am now? That’ll be a comfort, one way–never to be an old woman– but then–always to have lessons to learn! Oh, I shouldn’t like that!’
― Lewis Carroll, Alice’s Adventures in Wonderland

And finally, you know how I always say “still pictures are Moonlight’s worst enemy?” 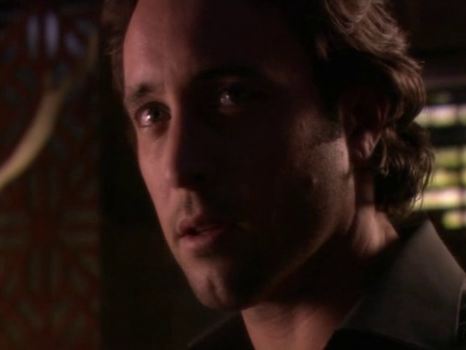 The look in his eyes makes me wanna change my mind.

…and you girls know a set-up when you read one. Go to!

I am good with: Details, Bad Ideas, Hilarity, Sarcasm and Overthinking! I kid because I care!
View all posts by SJ2 »
« The Adventures of Stick!Steve McGarrett (In Halawa Prison)
The Day the Five-0s were Just Like Us (Oh Curses! Edition) »